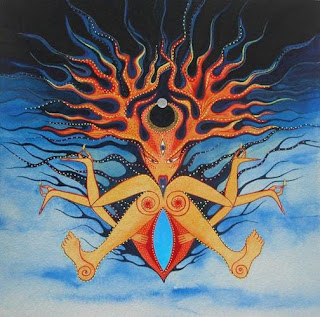 I am no fan of Lady GaGa. Pretty much everything I've seen by her so far is boring and dull at best, and just plain sick on average. I have refused to talk or write about her especially here on my blog because in this crazy time in which we live everything is advertising, and in our ultimate vibrational reality whatever we focus on manifests. But this morning I saw a video that really got to me, and spoken so much to me that my feelings are still confused.

It is called "Born This Way". In a nutshell, it is the average parade of emaciation, androginy, and vigorous choreography that is too half-cocked to show full nakedness and real, natural sexuality. But this is not your average MTV video. Maybe I am too sensitive at this point, but the symbolism and references she presents this time run too deep not to heed the call of an artist not used to knowing what she is talking about.

In the creation myth at the very beginning, she tells of the Eternal Mother hovering the Multiverse, and giving birth to Divine Twins, one that is perfect liberty and the other being protective evil. This rang too deep a bell within me not to let the whole song (with a very positive message, for a drastic and welcome change) get to me. At the same time, she presents herself, a celebrity and brand-name accused of enormous vileness and celebrated as the redeemer of the oppressed, as not just beyond good and evil, but the creatrix of both. She used a myth older than Time and a fundamental truth of the deepest human nature and origin to legitimate and consolidate her music-selling business with astounding success and unbelievable coldness.

Yes, I am torn. Just like the Mother Monster of the video.

Lady GaGa has always been monstruous. The dance number on blood that got her international attention got people doubting she would be able to keep up with the extreme appeal, and the meat dress on the cover of Rolling Stone freaked the shit outta vegetarian me, personally. The crippled woman dance on one of her videos haunted me for days after I watched it. Her sex appeal is not just violent, it's anti-sexy and repressive in many ways. Far beyond music, her career is being repulsive. This video is not different. She's the usual monster. But she's Mother Monster this time. She is, to effect, the Mother Monster protrayed on the video, and she is not ashamed of it. Why should she be?

Why should we all be ashamed?

This piece has a real message, and I got it. And I agree with it. And it makes my spirit fly.

But the visuals are still repulsive.

Image: The Sheela-na-Gig, from http://www.hohochiheaven.co.uk/.

That video has a great beginning, with that weird double birth scene and all. But then it's just "I'm singing my shitty song and wow look, I'm friend with a guy that's got tattoos all over his face". She's provocative, she's interesting, I understand why so many people love her. But I still don't like her music. It's a shame, I think she's got the skills to do better.

This is the video we are talking about:
http://www.youtube.com/watch?v=wV1FrqwZyKw
It can be great to dance in the disco, get excited while drunk, but if you check the lyrics, there's nothing special in it, just another futile disco music from a (at least apparently) disturbed, sick mind. Apart from what you have pointed out about her usage of mythology in the video, the idea of being born this way and that this is cool got to me like "no need to change anything"... and that disturbs me a lot. In other words, her message could be something like "don't worry about improving yourself, e.g. with education, the way you are is already good enough" and spoiled kids being rude all life long could be fine for her.

Eddie this is definetely a great point!!

Speaking as someone whose gender is unapologetically "androgynous", I don't subscribe to the Paglian notion that androgyny is somehow not sexy. Maybe that's why I don't mind Gaga.

I was at a drag show last night, flaunting that self-same androgyny with comparable dance moves. You're welcome to think I was a repulsive perversion/denial of sex, but my tippers seemed to think I was plenty sexy, thanks.

You're welcome to think whatever you want of me, yourself or GaGa, but please just don't assume things I haven't written and comment based on your assumptions. I do think androginy CAN BE very hot, as can full-blown maleness and femaleness. But I don't think GaGa is sexy at all, and this is what I wrote.

Hi Awen. I finally found you! This is Samme from Zaadz. Remember? I made you that tarot collage. Please add me at Facebook. http://fb.me/samme1