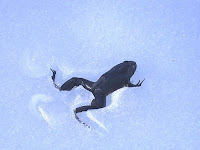 My professional life has always been a mess, and the older I get, the hardest I have to look to catch the most elusive glimpse of a way out. Or in.

I had the typical education of a firstborn-with-a-little-sister in macho freak South America. I was raised to have a militar career. When puberty came and my voice took a bit longer to crack, my parents very fortunately gave up on the obsession, because back in the daze the military was associated with heterosexuality. Well, come to think of it, it still is. But anyway, they started investing like there was no other possibility in making me a small businessman, because that's what my father was and we all know how the story goes.

My old people were kinda low key and VERY limited. Well, they still are, but 28 years knowing me have forced them to accept other possibilities in a universe like this. I sincerely trust that they had good intentions (in part because I fear going way too bitter this late in my emotional development), but how on Earth couldn't they see I needed drawing, guitar or dance lessons (something my sister had from the moment she could walk without leaning on walls) more than prescribed psychodrugs, or keeping my hair short or totally off-the-wall shoehorning, or multi-abuse? Back then, it just seemed right to think the fault of being misunderstood was mine.

Anyway, time passed, and because my mother had a college degree, she felt indebted with affording me one, too. I wanted Psychology. I wanted to investigate this fascinating world of honest emotions and shared feelings, something that was denied to me because I was born in the wrong place, with the wrong people. And wrong time, too, because I don't think I'll never fit this world before it's about 2050 common era. By then, maybe. So, mom wanted something glamourous, a career that implied a grey suit and a cold-ass stare, so she could look like a celebrity's mom to that miserable neighbourhood I grew up in. To the very best of my judgement back then, the only career that sounded like professional training, creativity honing and glitter was Journalism. Well, at least I'd be able to earn a living writing, right?

Wrong. Like every decision I took guided by my mom's urgings. Frankly, if I had her money and her sense of sovereignity when I was 13, I'd probably have grown up to be a winner today.

Writing is about 5% of what Journalism is these days, and most of Journalism students of my generation never got to work with it because of the scarcity of jobs in the field, the poor academic credentials and the huge mob of competitors in the market. Even those who did, are depressed slaves today. I had to let go of all connections I had with them in order to not be dragged down to alcoholism and suicide. So, I wound up with a useless degree in something that's useless for getting a stable job, a less-than-human identity, charges and demands from family and neighbourhood, and a violent depression. But I managed to fail in the suicide suicide part, fortunately.

I took a summer course in my first Summer after graduation on Art Therapy, and the facilitator, a college Psychology professor said: "the psychologist's nature is to move on to Art". That moment, at least two thousand bells rang in my head, and I realised I'd been on the wrong path from the moment I decided to let my mother influence on my academic career.

But because I avoided alcoholism, I became a self-help junkie. I managed to do fine in this new era, really. The finest I've ever done. Naïvety and irrationality are the best fuel I have used to move my machine to date: I broke free from parental oppression, moved to another state, landed a decent career as a translator and bilingual writer, admited I wanted to be a musician and started pursuing a training against all odds (and all evens, too, for that matter), then moved abroad and even got married. Accomplishments gays of my generation never ever dream of.

But the fairytale has led me to a new hard beginning. I live now in a xenophobic land that thinks my country is Disneyland with semi-naked women and pseudo-African rythmns. Unless I agree to be the next football sensation or this week's mulata, I probably ain't good for much. And I'd been living happily on language before the prince became a frog.

A few problems arose. First, I can rely on two languages to work with as a professional: English and Portuguese. Turns out the locals prefer what they all seem to call "native speaker" by consensus when it comes to choosing a translator, a teacher or a writer, even though that notion is scandalous nonsense, and most of the times it leads them to pick the worst candidate possible. No wonder hardly anybody can speak a foreign language here. And technically, I'm not a "native speaker" (whatever that means, since no-fucking-body is born speaking a language, except maybe Taliesin reborn, in that old Celtic legend I loved telling when I was a storyteller), neither of English, nor of Portuguese, because the news in town is that in Brazil we don't speak Portuguese, but "Brasileño", whatever the fuck these sicktards mean with that. So, now that I had landed a career and had started building a nice resume, I'm back to ground zero with five years more counting against me in a youth-worshipping culture obsessed with perfection and no idea whatsoever of what a foreign language actually is. And no degree to stand above questionings (Spain's national sport), either.

I decided then I'd just temporarily move to "informal economy", as we call it in Brazil. I hanged signs advertising private English and Portuguese lessons in public libraries. In all libraries I posted them, lack-mentality, EFL-teaching jerks ripped off my ads and posted their own. I used to rip theirs off, too. But tonight it made me just too depressed that, after all I have been through, I'm now reduced to this.

Frogs are said to unfreeze when the Winter's over and to come back to life, brand new. I just want to hope there's still an irrational all-winning idiot somewhere deep inside me, just waiting to unfreeze and start leaping and frolicking again when Winter's over.

I would like you to try the following suggestion. Three images that you imagine through all of this experience, the neighborhood, the language, the assininities of rhetoric bullshit, the standards of parenting, and education, imagine those things and sketch them this weekend if you can.

Then let me know what comes to you by way of oil pastel creation. Those feelings can sometimes create awesome images which can like a warming frog... perhaps reveal something just on the other side of the rainbow.

Be well and please stay in touch my fine friend,

you are not alone,

Okay, now this got me on FIRE, and I'm certainly getting back to you with this one!! Thank you, Jesse!!

Indeed. After reading this - I started to think about my folks and coming to terms with them. Then I started thinking of what I am doing next. In January of next year I plan to relocate to Costa Rica and teach English part time. I heard the story from both sides of the fence. Ugh...maybe I will just be the creepy american and open a boy brothel...

No, seriously. If you do that, you'll go rich, rich, rich. Latins are en vogue here in Europe, sexually speaking.

What came of Jesse's suggestion, Awen? I love it! As I was clicking the button to reply, I was thinking "Mindmap!" But this is an awesome idea, too. Time to dig through the tool box again...

I'll email it to you, Di. We were cooking up a new blog as part of the project that began with that oil pastel piece... But who knows where we're going from here? ;)