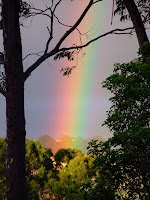 We got married yesterday. Whatever was said that day or before, and I know this because I was there, they didn't mean those mean words. Everybody was touched in a way. It was a beautiful occasion, an important day, and the celebration of enough strength, faith and power to overcome the usual difficulties of sharing a house with a person very different from you, moving to a very different country and practicing radical acceptance.

The day began early. A rather charming conversation between my mother and father-in-law had happened a few days before:

Father: One of these days, Jose will marry.
Mother: Yes.
Father: When it happens, don't make me aware of it.

So, my brother-in-law and his wife picked my mother-in-law up early that morning and drove to our place. From here, she helped me iron my gold shirt and Jose's brown one for the big day, and we went to the civil registry to meet the rest of Jose's friends. Jose and I said "I do", Curri and Ángel took photos and then had lunch in my favourite restaurant in Madrid, a vegetarian and pirate-inspired place very appropriately called "Isla del Tesoro". Really nice. Then we went to have a coffee in one bar, a drink in another and slowly one by one we came home while the group went bar-hopping. Nothing that was said would move me from my center and from the glory of that day. It was all earned with merit and a very rare sense of honour.

It's merry to live in a country where gay people have civil rights, even though not many other things about it are as merry. Married life isn't new to me in many ways, since we had been living together for a year and four months. But even though we've been walking the same road as one ever since, from now on the roads we cross will see each of us both in a very different light. Which is what I sought.

And I love my husband.

Congratulations on commencing your journey of complete commitment. As a married man, several doors will close, but even more will open before your eyes. May you and your true love remain in bliss as long as you both shall live.

Congratulations and I hope you will have the best of experiences coming.

It is nice to belong to something beautiful, and I consider as I do the most ugly thing, or the most crystal clear image through my eyes..... the same, and that is reality.

Have a great one.
jesse

Another step. Another milestone. And a new set of wings. It's all so good.