The latest hot topic in Blog-o-sphere 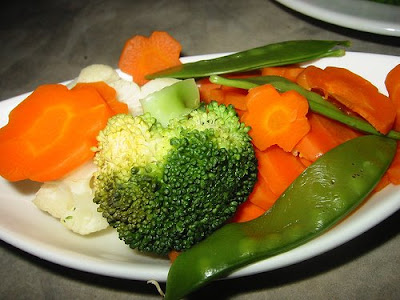 Disclaimer: I by no means intend to convert anybody to my lifestyle or point of view. I've never wanted to, and pray that I never will. I hope you read this in a spirit of Respect, too.

I've not always been a vegetarian. I grew up in a society where the basic meal is refined rice and a huge beef steak. Most of the lowest half of South America lives on meat, especially cows and oxen, and when you grow up in a place like Southeastern Brazil you hardly ever question your eating habits. That's what your mom, dad, grandparents, friends, teachers and priests eat everyday, twice a day, and they're fine, so that's what you're going to do.

My metabolism is very accelerated compared to the majority of people, I guess. So I ate lots of meat, because in the mindset I have inherited (and the only one I had to work with back then), if you're still hungry, you're eating too little. It wasn't until my senior year at school that a phonoaudiologyst noticed I had too little flexibility for somebody my age, and that my back and the back of my legs were "compromised". Then, at university I started on Yoga. I still think Yoga is probably the best and definetely the only physical activity I can engage with enthusiasm, and my next New Year's Resolution is to start doing it three times a week again. In a brand new social environment, full of ideas, experiences and adventures, I discovered for the first time ever that many, many people in this planet (even in Rio!) lived pretty well without eating corpses.

I don't remember being shocked, but it was definetely too much for my head back then, so I just started reading a lot on the subject of Nutrition--especially Alternative Nutrition. I think from what I garnered back then, I don't think anything over two percent of the world's population actually needs to eat warm-blood meat (birds and mammals). It'd probably take somebody from blood group O, with high intolerance to lactosis and chlorophyll, and several other digestive disfunctions and health issues, then probably some very specific emotional setting. Some of the people who came to the sessions, like my second Yoga instructor, had been vegetarians (if not vegans) for over ten years. Maybe twenty, I can't really remember. And they all looked so fucking better than all the adults of my previous life. So I asked them loads of questions, and got them to teach me many recipes and techniques. I came home, taught them to my mother, who also didn't really like meat anyway, and we began eating so much better in the family. On New Year's Eve 2000 I made the resolution to not eat beef again for the new year. McDonald's burgers were okay, because they didn't taste like that strong South American beef we had, and because rumour in Brazil were that they were made with worms, not mammals. But very fews months later, I think on March '01, I decided to ditch even McDonald's meat, and since then I have really eaten meat of my own volition.

I still drink milk (half a litre everyday, I think), plus eat LOADS of dairy. I could never cut milk from my diet, and never really wanted to. I had given up eggs too when I moved to my own flat, but still ate eggs when I visitted my parents or other relatives.

But then marriage came. I know you're supposed to make sacrifices, and the Gods and my blog readers know I have made many. Even my husband knows, but he just won't admit it. I haven't adopted carnivorism/omnivorism as a way of life, but I did try Jamón Serrano, Spain's national pride, had strong pork broth soup (Cocido Madrileño) twice, beef consommé for the most miserable New Year's Eve of my life so far, and ate iberian Xmas delicacies made with pork fat (polvorones). Yeah, people still eat pork fat in a world like this. That's right, and then Dunkin' Donuts and Americans are the devil who feeds the rest of the world with animal mortal remainings. Go figure. I also eat eggs three times a week now. But I'm fine with that.

Most of my live friends and peers these days are carnivores, and it's been teaching me some interesting things. We vegetarians are famous for considering ourselves above the general scope of humanity, but then I have never ever even read a blog entry of a vegetarian trying to convert people to Vegetarianism. At least, not the way carnivores have tried to "seduce" me waving a piece of burnt flesh or a bird's limb in front of my face. Or to convince me I'm gonna be sick, weak, mentally retarded, emotionally handicapped and spiritually destitute if I don't eat like them. Carnivores are ALL over-rational and extremely discussion-"friendly". And that probably means more than I am able to grasp.

I do believe there is a reason why we became carnivores at some point in Pre-History, and it was really important, and really useful back then. Honestly, I even wonder if my carnivore ancestors have made me a better vegetarian; and chances are, they did. But in a world today, with all the fresh water issues, all the need to protect the Rainforest and the indigenous flora of several places, and all the crazy ways we have been breeding "Life" to suit our economic interests, I don't really see myself contributing too much to a clever [r]evolution of my species or the Gods I worship by feeding atrocious collective behaviours. I said, "behaviours". Please note that I used it in the plural.

Maybe, actually probably, it's merely my part to be played in this. I definetely trust that meat-eaters have a reason to eat meat, and if they shouldn't be eating meat their bodies would react in some way, like mine did before I reached legal adulthood, but food is currently, probably the only aspect of life I'm 100% peaceful about. It certainly has got to do with living in a food-affirmative culture like central Spain, but it also happens as a consequence of aligning all my parts and Selves and bringing them in agreement around a single issue, and relaxing on the certainty of my place in the Universe and how I join it in complete Harmony as I eat. I'm a Pagan. That's too important for me.

Image: steamed vegetables. The first lesson I learnt in veggie cuisine. Then I'd cook a sauce and mix into them.

Im new to the site. really looking forward to meeting new people, seeing what they have to say and just really chilling on some social network other than facebook. bleh. like i said, i am me, now who are you?

so how is everyone doing? Dennis from [url=http://www.myonlinepayday.com]My Online Payday[/url] website!

Brilliant idea and it is duly

It was and with me. We can communicate on this theme. Here or in PM.

Unfortunately most of us will never get the opportunity to step onto an NFL field so these special jerseys are the next best thing!As a former football coach and player I enjoy writing about anything related to Football and other sports Thus if you're planning to put up company on the web then why not give the wholesale jerseys business a attempt
In fact most internet hosts now offer you WordPress (or other cost-free blogging software program) like a cost-free internet site add-on through Fantastico Mitchell's examination into the use of steroids and HGH (Human Growth Hormone) by major league baseball players