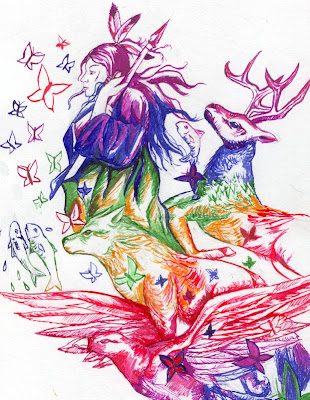 Yesterday was a beautiful day. It was actually pretty much like any good day of my Golden Days back in Sampa. I'm feeling happy, worthy and very energised.

I had arranged to meet my new friend from Couchsurfing Emma, who's beginning her world trip here in Madrid. I took her to my favourite place in town, Templo de Debod, and showed her the most beautiful Autumn sunset a person can possibly see in Madrid. When we sat by the fountain and started talking about buried treasures in Madrid and her native Ireland, a joyful "Awen!" cut the stream of conversation. I replied "Dani!", and there was him, my other new friend from Couchsurfing, who I had arranged with later on to bring him to my gay men's yoga and meditation group. The way we met was so sweet. We had never seen each other, but we knew who we were. He had an Australian friend surfing his couch for the weekend with him, another Emma. So, after crossed introductions, the four of us headed to the yoga lesson, and had a great time. The Emmas left after the yoga. The Irish one had another Couchsurfing appointment, and the Australian Emma had a hard time with meditation. Dani stayed to the end of the meditation, loved it, and then participated in our Active Listening circle we have afterwards. I love the Active Listening circle, but last night was special for me. I joined the circle in a spirit of protest against the homophobic propositions in the USA, most especially the H8 in California. I shared in the circle my hurt feelings, my frustration, the unfairness I saw in putting a fundamental right at risk, against an oppressive homophobic, ignorant and fanatic majority, how they have taken from us a right we ALL had in CA. Not just gays, but everybody who wanted the right to define their own family. I told them how I felt insecure. How my family, my husband and me, feel insecured in a world governed by fear and hate. Afterwards, in the dressing room, everybody came to tell me they felt like that, too, and that it was important that I said that. Spain, such a fervorous catholic country and one of the five countries in the world that has gay marriage, is not really free from the threat of fundies like Rouco Varella, who never misses an opportunity to go on TV and say how endangered "traditional family" is, and how many enemies this "important institution" has. They gather thousands of people for a protest downtown Madrid against gay marriage. We gays can't gather enough ppl to agree that everybody who wants to marry should marry. I really hope my right to marry is never put to vote here in Spain.

Then, Dani and Emma, who was sitting at the lobby, left for another Couchsurfing event they had planned, and I went with the guys for our usual dinner. At the restaurant we always go to after the meeting, there was for the first time ever no place for everybody, so the group was split. Some left for another vegan-friendly diner, but I was in the group who stayed. When I was serving my dish in the buffet, a Sevillan "Awen!" coloured the air.

"What are you doing in Madrid?", I asked.
"We are all in Madrid tonight! Check the back of the restaurant."

The Spanish Pagan community had arranged to gather all in that diner, that exact night. I had my meal with the yoga boys and later I went to share a nice conversation about ESP experiences, language barriers and Reiki with Javi (Sevilla) and Diego (Salamanca). When the diner was about to close and we were being kicked out, the Madrilean pagans all hugged me, told me they missed me, thought they had scared me, and made me feel really dear. I have a community.

Then, the yoga boys came to give my jacket and my bag back to me and to say goodbye. We pagans were already leaving, so we had our merry-part, and I came home on the last metro that night.

I arrived, turned the lights on, called my husband (who's away having quite an adventure in Morocco now), and went to bed feeling happy.

On our way to the yoga lesson, Dani and I talked a lot in Portuguese. He had lived in Brazil, and now lives in China. A globe-trotter. I told him how I was a storyteller, and he was really interested. This morning, my Morning Pages were not focused on my frustrations with music for once in a long time, but rather, filled with quite an excitement for wiping the dust of my repertoire and trying some old tale upon willing ears.

Would I be out of the fridge yet?

I read this post with the utmost of personal regards for the messabe the words. I jus happen to live here in California. The place where this oppressive policy was put to the vote.

Just yesterday as a colleague and Tres Zapotes walked they say a huge protest walking up Broadway, a major downtown street in San Diego. My heart goes out to all families and to all humans.

Thank you for your post, and your sharing of good times with great friends. We are up and running here on Collective Soul. Your turn to post a journal please.

I'm so confused... You said on Sunday you were blocked! This wonderful day sparked your storytelling flame! Far from being blocked, this sounds wonderful!