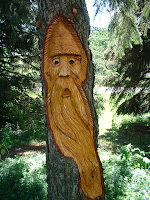 It's late already, I'm dead-tired from a hard day of work and school, and I still want to sit and write this. The English language doesn't have many words for this feeling, so I say I "want" to write, but it's actually a special type of "want". It's not backed by enthusiasm, inspiration or lust. It's driven by a deep feeling of inadequacy, destitution and even maybe a little self-loathing.

I used to be good at this. I mean, better than I am now, and I used to change the world with every piece. I remember it, even though there is no evidence of this around me anymore, and this absence hurts me. I'm a slave to the memory of good times.

These past days I've been reminiscing about Brazil, about moving to Spain, about several things in the past, and how everything was so fresh, and so powerful, and so spontaneous, and nothing was as complicated as it is now. Songs have been coming back to me, the soundtrack of other times. "Dandelion Wine", "Marcas do Que Se Foi"...

Memory, actual or imaginary, is the raw material of storyteller's business. I've traded freshness for stories, and I've got quite a few to tell by now.

My blogging is about to change.